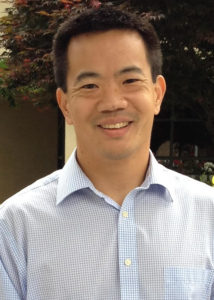 “In the fields of observation chance favors only the prepared mind.”  This quote from Louis Pasteur is the first thing people will see when visiting Mr. Ting’s class website.  It reflects his belief, as demonstrated throughout the history of science, that accidents and mistakes became some of the biggest discoveries because the scientist was prepared to work with that mistake.  From Teflon to x-rays to Pop Rocks, people who first went “oops” changed the world.  Mr. Ting can’t predict what will happen in the future of every student he has the privilege of teaching, but he only hopes that he can help them be prepared for their chance to make a difference.

Mr. Ting is a Midwest transplant, having grown up in Ann Arbor, Michigan, earning his Bachelor of Science in Chemistry at the University of Michigan, and his Master of Arts in Philosophy with an emphasis in bioethics at Trinity International University in Deerfield, Illinois.

One of Mr. Ting’s first memories of teaching was helping a hall mate during freshman year learn about chemical equilibrium by using a pair of tennis shoes and a pair of flip flops as visual aids.  Although being an educator was not among his first thoughts of a profession, he found himself constantly in teaching situations in his work experience.  Soon after moving to California, he was given a chance to earn his single-subject credential while working as a full-time teacher at San Leandro High School.  He then moved to James Logan High School, where he has taught all levels of chemistry, been a curriculum lead in chemistry, and advises the Science Club. With over a decade of teaching experience, Mr. Ting values the opportunity to inspire young minds.

In his spare time, Mr. Ting likes to maintain an active lifestyle.  He practices multiple styles of self defense, and he and his wife have each run over thirty Spartan Races, and continue to train for their next event.  He is currently pursuing certification as a fitness trainer.  In all facets, academic, physical and spiritual, he wants to help people build and sustain a sense of accomplishment.  He is excited for the opportunity to do this at Mill Creek Academy.