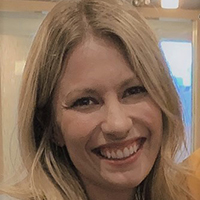 Ms. Vint’s first literacy practices involved command-driven role play games on the MS-DOS operating system of the late 80s. As a girl, she was challenged to direct her computer character to complete tasks by inputting different text-based instructions. Some of the greatest outcomes from these experiences are well developed strengths in analysis and problem-solving, and because of this, during her K-12 studies, she excelled in math and science. These strengths, however, left her to feel a bit of unease with literature studies, as concrete problems and formulas provided her a structure in which she found immense comfort.

During her undergraduate studies at City University New York (CUNY), she discovered an admiration for language, also finding a similar, complex formulaic nature within linguistic structures and rhetorical appeals. She earned her BA in English Language with a minor in Spanish, thriving in the study of historical linguistics and learning Spanish as a second language. Because of her advanced Spanish competency, Ms. Vint spent a semester studying in the Cursos Internacionales program of the University of Salamanca, in Spain, and was one of a select few students invited to enroll in a course within the University, alongside other Spanish students.

In 2014, she began her MA in Language and Literacy within the City College of New York. During her time there, she won the Overall Merit Award, as well as the Marilyn Sternglass Writing Award, for her historical analysis of language used to construct identities about and within Native American communities.

Her professional goal was to teach English as another language, but became involved with writing studies, by chance; because she discovered the tools and skills needed to craft effective texts – that which seemed to evade her, relentlessly – she became passionately devoted to developing other budding writers. Her MA program provided her the avenues to actualize this dream.

Ms. Vint holds a fondness for students in STEAM-related fields, as her father and brother are both software engineers and since she spent many of her formative years under the guidance of a parent with very technical communicative practices. She has gravitated toward teaching advanced writing and research methods in the sciences and technical communication for engineers, to undergraduate students throughout New York City, and recently worked with the Chief Technology Officer of a New Jersey-based company, providing communications coaching.

After years of teaching freshman and sophomore college students first-year writing and research skills, she now teaches effective business communication to upperclassmen within the University of Connecticut School of Business. The practical applicability and emphasis on clarity and exposition are grounding factors in her success and comfort in this area.

Her approach to writing instruction and tutoring is impacted primarily in that she is hyper-sensitive to writing angst and apprehension, and in the way that she sees texts analytically, primarily for its rhetorical appeals. Each text is analyzed in terms of how effectively the communication meets the intended goal, considers the audience, features statements crafted carefully with appropriate evidence and/or context, and how the author’s image is portrayed through the text.

Ms. Vint is also a third-year Ph.D. candidate in the Composition and Applied Linguistics Program within Indiana University of Pennsylvania. Her research interests surround the social-psychological impacts on individual literacy and communication habits, and beginning the fall of 2021, she will begin research for her doctoral dissertation. She looks forward to supporting students as they navigate the college essay process.