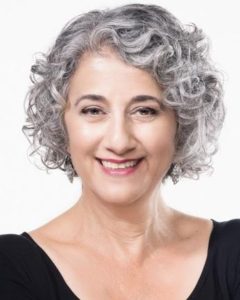 Ms. Gimeno, a native to San Francisco where she attended Lowell High School, didn’t leave far from her San Franciscan roots to pursue her undergraduate degree at the University of California, Berkeley. There, she received a double Bachelor of Arts degree in Spanish and Linguistics. During her Junior year in college, Ms. Gimeno had the opportunity to study with the Education Abroad Program in Barcelona, Spain where she attended the Facultad de Filosofia y Letras/La Central in Barcelona. Upon her graduation, she continued her graduate work also at the University of California, Berkeley where she received her teaching credential in Spanish and English.

A seasoned teacher, who taught at both Foothill High and Amador High in Pleasanton for 11 years, has continued her love for teaching as she celebrates 28 years with Fremont Unified School District in June 2016. Ms. Gimeno has taught all levels of Spanish, including AP Language and Culture as well as AP Literature and Culture. Currently, as the World Language Department Chair at Washington High School, Ms. Gimeno is focused on ensuring her students are finding the value of learning a second language. Additionally, she serves as a BTSA mentor teacher, a PAR Consultant, a member of the Student Study Team and Writing Task Force, and a WASC Focus Group Leader. When her schedule permits, she is also a reader for the AP Spanish language and culture exams. Ms. Gimeno has dedicated herself to educating young minds and bringing cultural connections to her students. Organizing student abroad trips with her students, she has taken them to Spain, France, England, Italy, Morocco, and Colombia. During her trip to Colombia, her students were hosted by Colombian families and spent a weekend at a coffee plantation learning about the entire coffee industry in Colombia. For 10 years, Ms. Gimeno has continued to coordinate the “Colombians are Coming” Homestay Cultural Program at Washington High School. This program allows for her Spanish students to host Colombian students in their homes for one week. In exchange, the Colombians perform in musical assemblies for all of the Spanish language learners, displaying many of their songs, dances, and customs of Colombia.

While Ms. Gimeno is incredibly busy with her teaching career, during her free time, she can be found performing in Broadway musicals with various community theater groups, playing piano and guitar, reading, and finding time to squeeze in work out sessions at the gym. She is excited to bring her knowledge content and Spanish cultural ties to the students at Mill Creek Academy.